Last week at this time my boyfriend Tim and I were headed to Jetpack Adventures in North Myrtle Beach, South Carolina to blast off above the water and take on the sky. We’ve watched flyboarding videos on the Internet, but now we were about to be the ones strapped to a jetpack and swooshed above the glistening lake. It was an exciting and jittery feeling, but it was an experience waiting to be lived.

We were scheduled to go one at a time: I’d fly at 11:00 and Tim would go at 11:30. We arrived a half hour before my flight, as suggested, and watched a man hover through the air, connected to a large hose dragging a jet ski. His family cheered him on and snapped photos, and before I knew it, it was time to sign my life away and strap on the pack.

Prior to my take-off, the flight attendant provided instructions, such as how to turn left and right while hovering (which meant slightly raising that side of the bar on the pack), where the power button was located, how to get out of my harness, and performed a safety check. He tightened my helmet, which had speakers in it so that I could hear his instructions while in the air, and had me dragged out on my back to the middle of the lake. 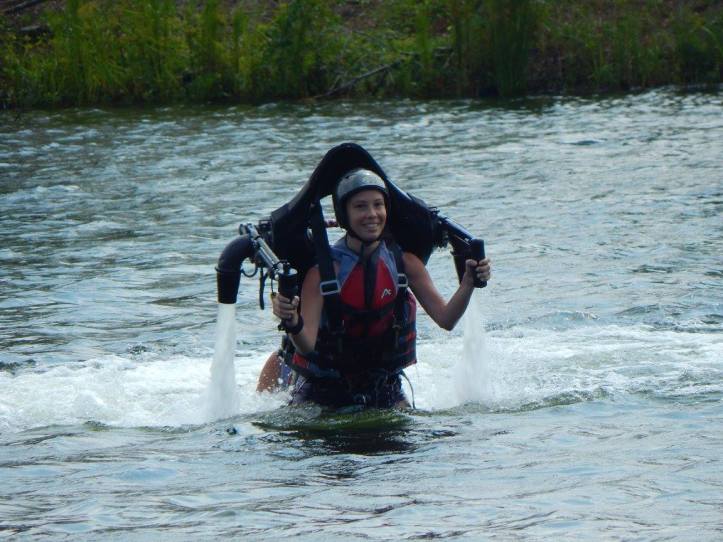 Though the jetpack did float, it was a bit hefty — probably about 20-25 pounds, so when I was let go in the lake, it was tough to keep myself facing straight up, as it pulled me down forward, with my face practically in the water. It wasn’t the most comfortable feeling, so keep in mind that if you’re not okay with your face getting wet, this adventure may not be for you. But within a couple of seconds, I heard the rushing water as the jetpack was powered by the hose, and I began levitating. It was extraordinary.

I felt the water from the back of the pack bursting onto my legs, which stung a bit, but hey, I was on a jetpack! I followed the flight attendant’s instructions and turned left and right, and he powered the pack up a bit more to get my feet completely out of the water and soaring through the sky. It felt unreal, and even though I was in the air, I couldn’t help but to keep paddling my legs as if I were swimming. Think of a small dog before you put it in the water — it would normally start paddling before touching the water — yeah, that was me. Normally, you should keep your legs hanging.

Though I had 15 minutes to fly, I was in the air for about 10, and, believe it or not, was so tired out that I threw in the towel (or jetpack) early. Flying on a jetpack above the water was by far one of the craziest experiences in my life, but it was also tiring with the pack on my back, on top of my swingy legs. The minimum weight to fly is 90 pounds and the maximum is 350. I’m thinking because I’m on the tiny side, I felt a little weighed down. 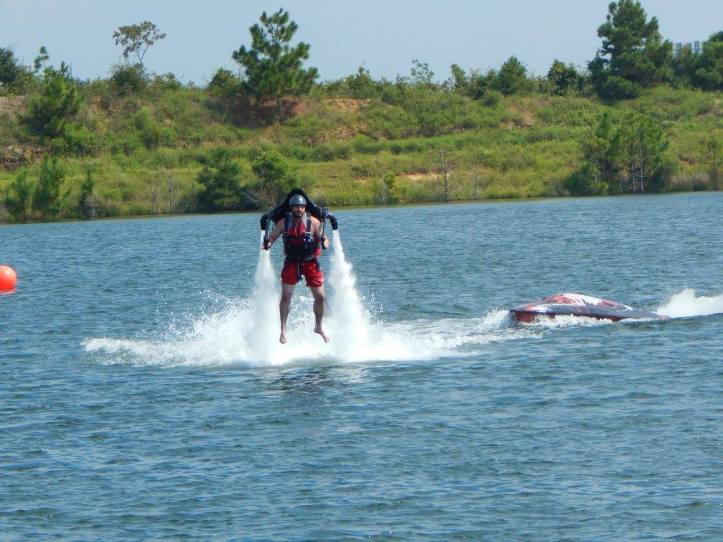 Tim on the other hand did not have that problem! He zipped around for 15 minutes, soaring way higher than I did. You could fly up to 30 feet in the air, and though he didn’t reach that height, he flew higher than I did. It was incredible to see him buzzing around on this crazy invention, and he enjoyed every bit of it, too.

Do I recommend flyboarding? Absolutely! You’ll leap outside of your comfort zone to do something fantastically amazing, and it will make for a great memory, and story, for the rest of your beautiful life that lies ahead. Because how many people can say they’ve flown on a jetpack?!