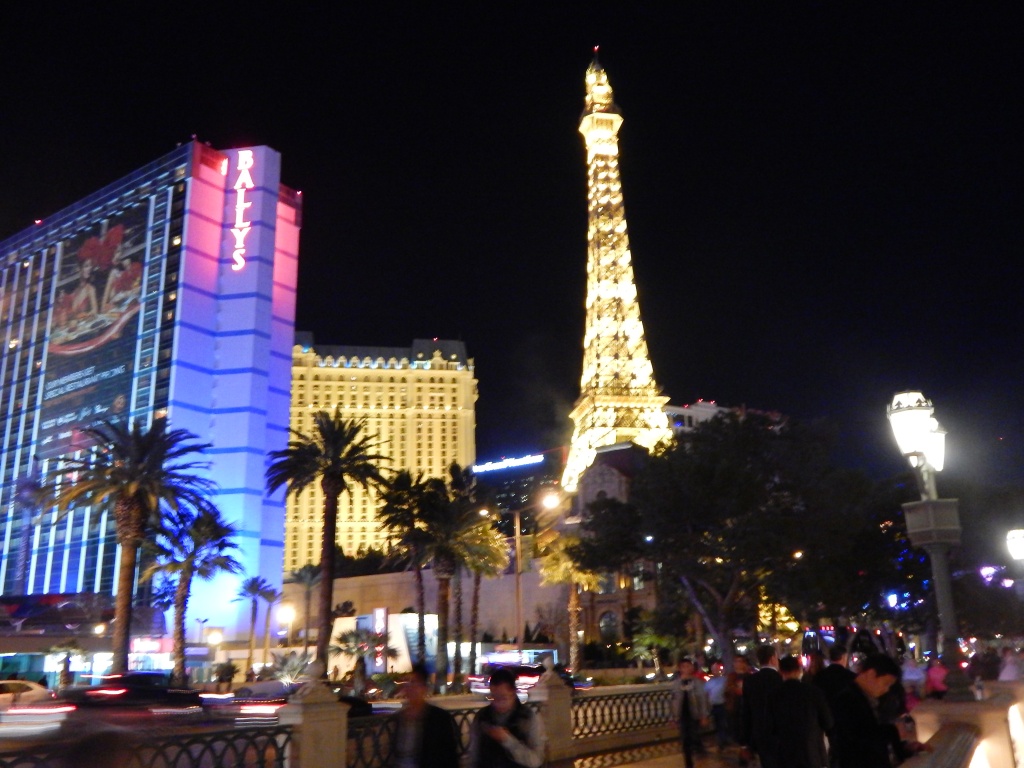 Las Vegas. Disney World for adults. Sin City. An addict’s dream land. I was fortunate enough to spend a few days in this flashy place, right on the Strip up in Caesars Palace. My purpose there was to attend the 2015 Consumer Electronics Show (CES) on behalf of the magazine and website I work for,electronicproducts.com. I enjoyed CES, which was at the Las Vegas Convention Center and scattered about the Strip. I spent the majority of my mornings and afternoons at the show, mingling, snapping pictures, riding the monorail, and pretending I knew where I was going (somehow, I kind of did!). But when the sun went down and the moon came out, after my articles were written and I spammed my Twitter followers with pictures of dancing robots, huge TVs, and self-driving cars, I joined the buzzing crowds outside to explore my new surroundings.

I was very excited to see the Bellagio water show, which was fantabulous. Absolutely beautifully done. I was amazed how the shooting and swaying water was so in sync with the music.

The hotels along the Strip, including the Venetian, the Cosmopolitan, MGM Grand, Bally’s, and of course, Caesars Palace, were magnificent. They’re all huge and clean and are filled with never-ending life ($$$), and slot machines (-$$$). I gambled but lost my money. I don’t want to talk about it. Anyway, let’s get to the food! 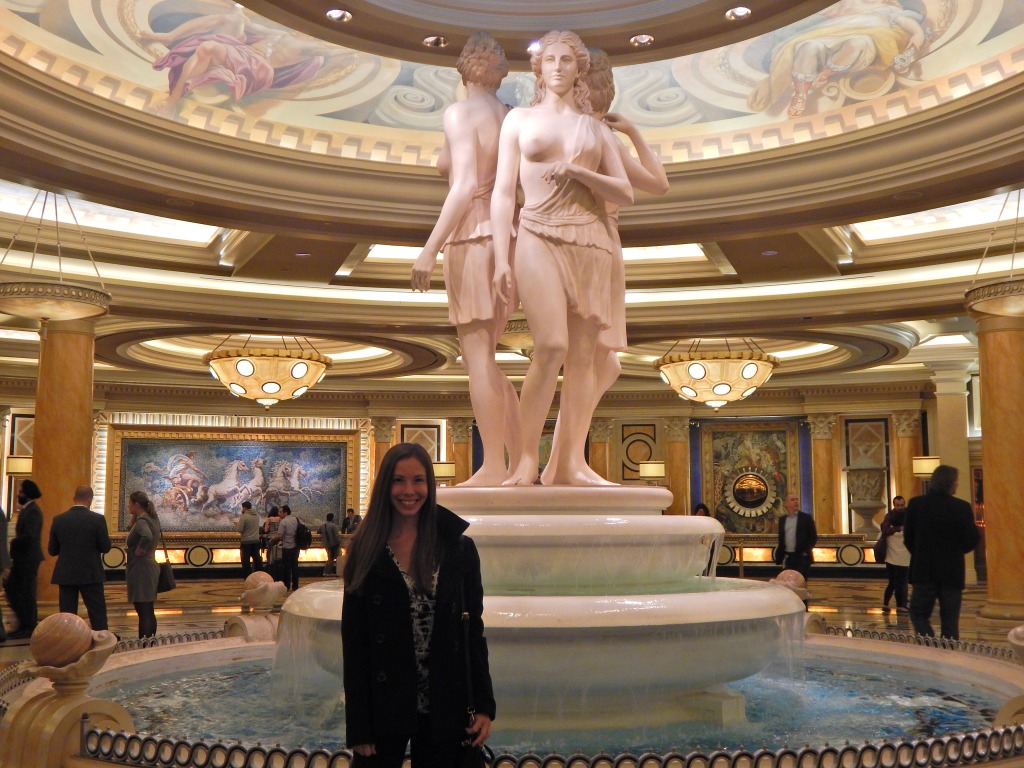 The food was expensive for the most part, but flavorful and SO GOOD. My boyfriend and I ate at Gordon Ramsay’s Pub & Grill in Caesars. I ate up my chicken pesto sandwich on mint bread. I wish Mr. Ramsay’s restaurant here delivered to New York. My boyfriend devoured his cheeseburger and crispy fries. We also were fans of Trevi, also in Caesars Palace. It wasn’t as pricey as Gordon Ramsay’s, and the happy hour drinks were surprisingly cheap. We enjoyed glasses of red wine and peach margaritas. As for appetizers, which is why we stopped there (the drinks were a bonus!), I ordered eggplant bites and my boyfriend munched on mini burgers (he’s such a carnivore — I think he only ate meat our entire stay). I really liked the atmosphere of Trevi — it was dimly lit, artsy, and had two floors (a spiral staircase led you upstairs). The bartender was chatty and entertaining. Too bad Caesars declared bankruptcy. Everything about this hotel — the food, the scenery, and by the looks of it, the casinos — are great. It better get past this hiccup! I’ll sting a little bit inside if it doesn’t. 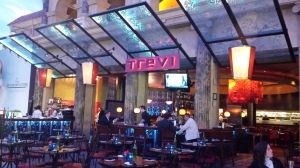 On our last full day in Vegas, we saw the All Variety Show, because how can you go to Vegas for the first time and not see a show? The V Show had dancing women, dancing midgets, singing parrots that flew through hoops, a disgustingly flexible man, roller bladers, a magician, and a game where the host called up four men in the audience to compete in a contest where they (one of them being my boyfriend) had to wear masks, blow up balloons, and sit on them as fast as they could. I laughed and pointed. And laughed some more. The elderly couple from Idaho that sat next to me asked if this was my boyfriend’s day job.

There was much more I wanted to see in Vegas, but I was thankful I had the chance to go at all, and I made the most out of my trip. If you like to walk on the wild side, feed into your addictions now and then (not recommended), blow your money on silly things and delicious food, and be surrounded by constant movement 24/7, give Las Vegas a chance. It’s one of those places you must see.

Nicole is the writer and wanderer behind sprangled.com. Inspired by big and small travels, she created the website with the belief that adventure is the best way to learn.

Reflections. 🤍
My favorite yellow dwarf star. 🔆
Happiness is a bike ride on a spring day. 🌸
Living life in full bloom at the tulip festival! 🌷
A seagull and a sunset.
Snorkeling, ziplining, and jumping off cliffs. 💚🐢😍 Live your life!
© 2021 Sprangled.
Theme by MyThemeShop.