Before I set foot on the Norwegian Getaway, I had never been on a cruise ship. After spontaneously planning a trip with one of my favorite people in the universe, my soul sister, Stefania, I could barely contain my excitement. We planned and paid for our cruise back in June, and had five months to go, as we set sail shortly after Thanksgiving. After 20-something weeks of day-dreaming and happily crossing off the days on my calendar, the morning of embarkment finally arrived. It was time to head to Miami and get the funk out of the United States of America! The Caribbean was calling!

Built in 2014, the Norwegian Getaway is 1,068.3 feet in length and fits 5,609 passengers (3,963 guests and 1,646 crew), which blew my mind. Here were thousands of people floating on a massive ship, which seemed like it’s own little city, out in the wild ocean. And it’s constantly going back and forth to many destinations! This time the cruise-liner and us lucky chicks were headed to Roatán, Honduras; Harvest Caye, Belize; Costa Maya, Mexico; and Cozumel, Mexico. ¡Hola, vacation (and mojitos and margaritas)! 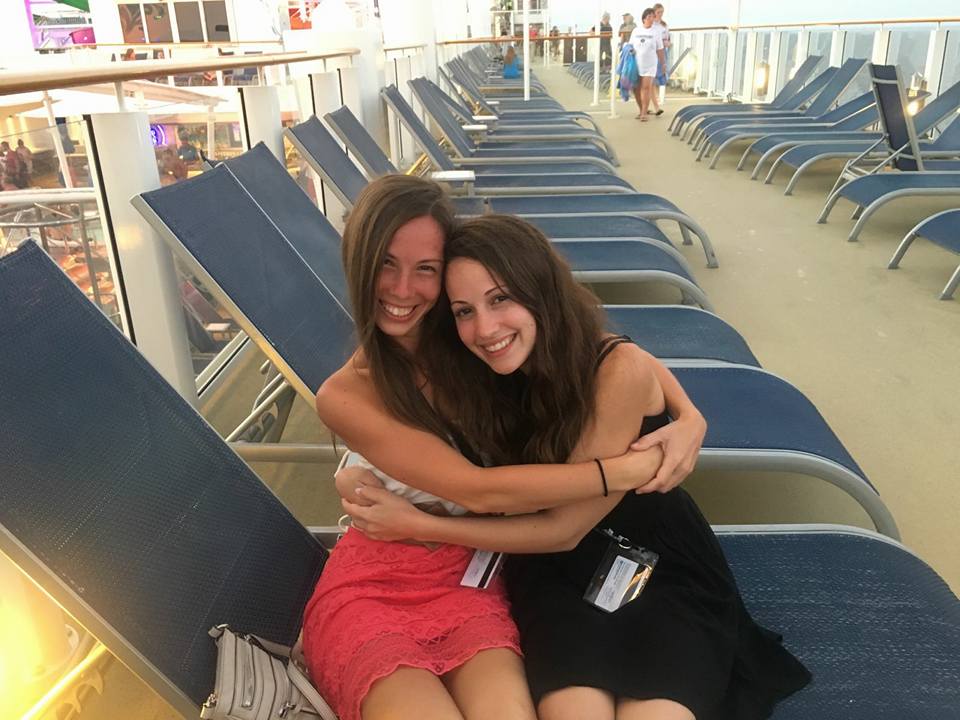 Me and Stefania having the time of our lives on our fabulous friendcation!

Once we boarded the ship, it was time to explore and eat. It took close to two hours for our room to be ready, but luckily we checked our bags, so all we had were our carry-ons to lug around. Our first stop was the buffet, and there was just about everything imaginable to munch on. For example, take a look at my plate of food below. Pictured is a quesadilla, a slice of pizza, yellow rice, egg-fried rice, short ribs, a random piece of meat that I forgot about, fries, mashed potatoes, roasted potatoes, and a glass of raspberry lemonade. Stefania had a similar plate (and as a cruise veteran, more control), and yes we ate most of it. 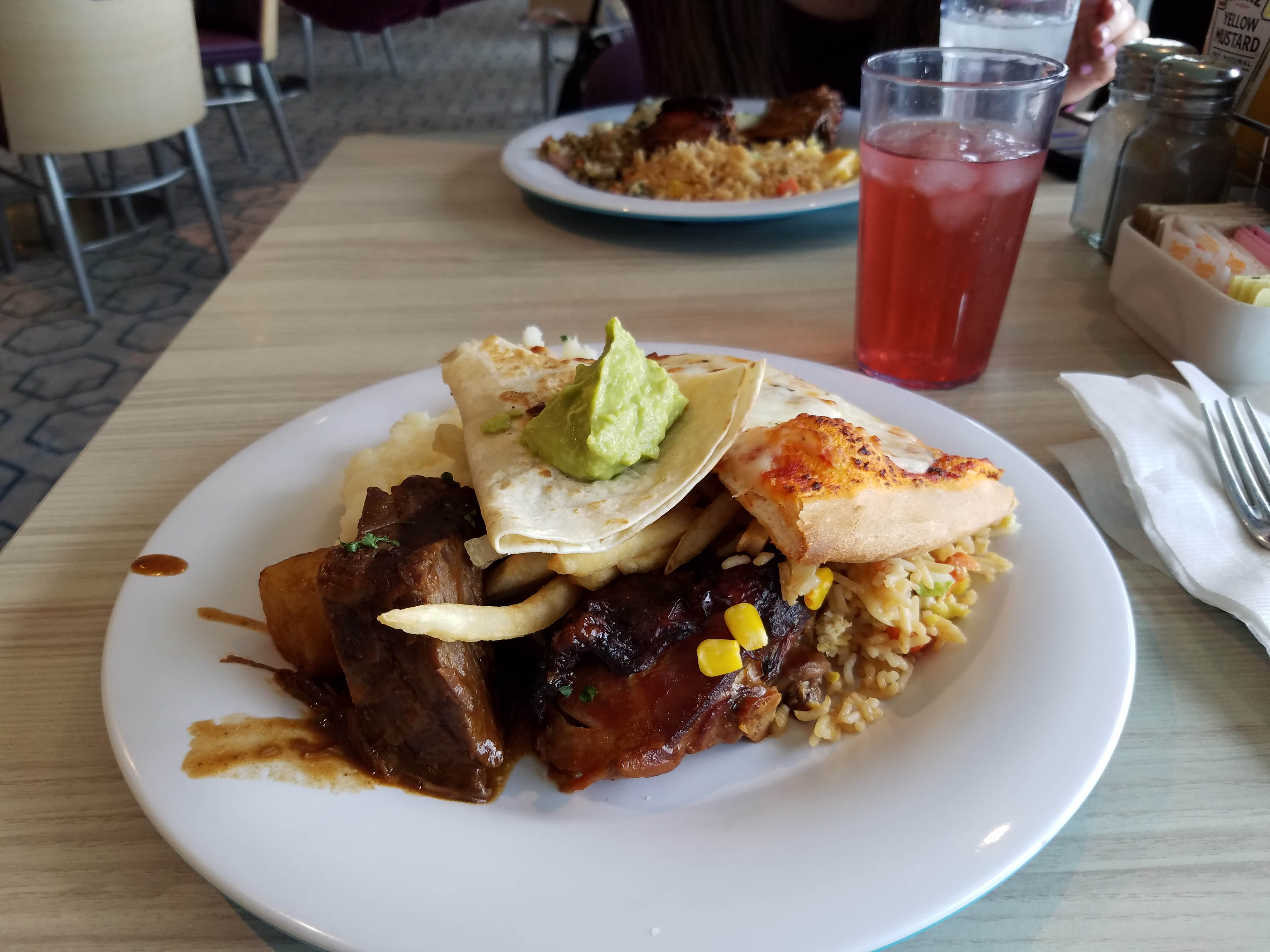 An avalanche of cruise food!

After eating an avalanche of cruise food, we walked around the ship, checking out all 16 decks and burning some calories. When the announcement that the rooms were ready bursted out, a herd of humans made their way to the halls. We were staying on deck 10 and arrived in one piece. Our checked luggage came shortly after. 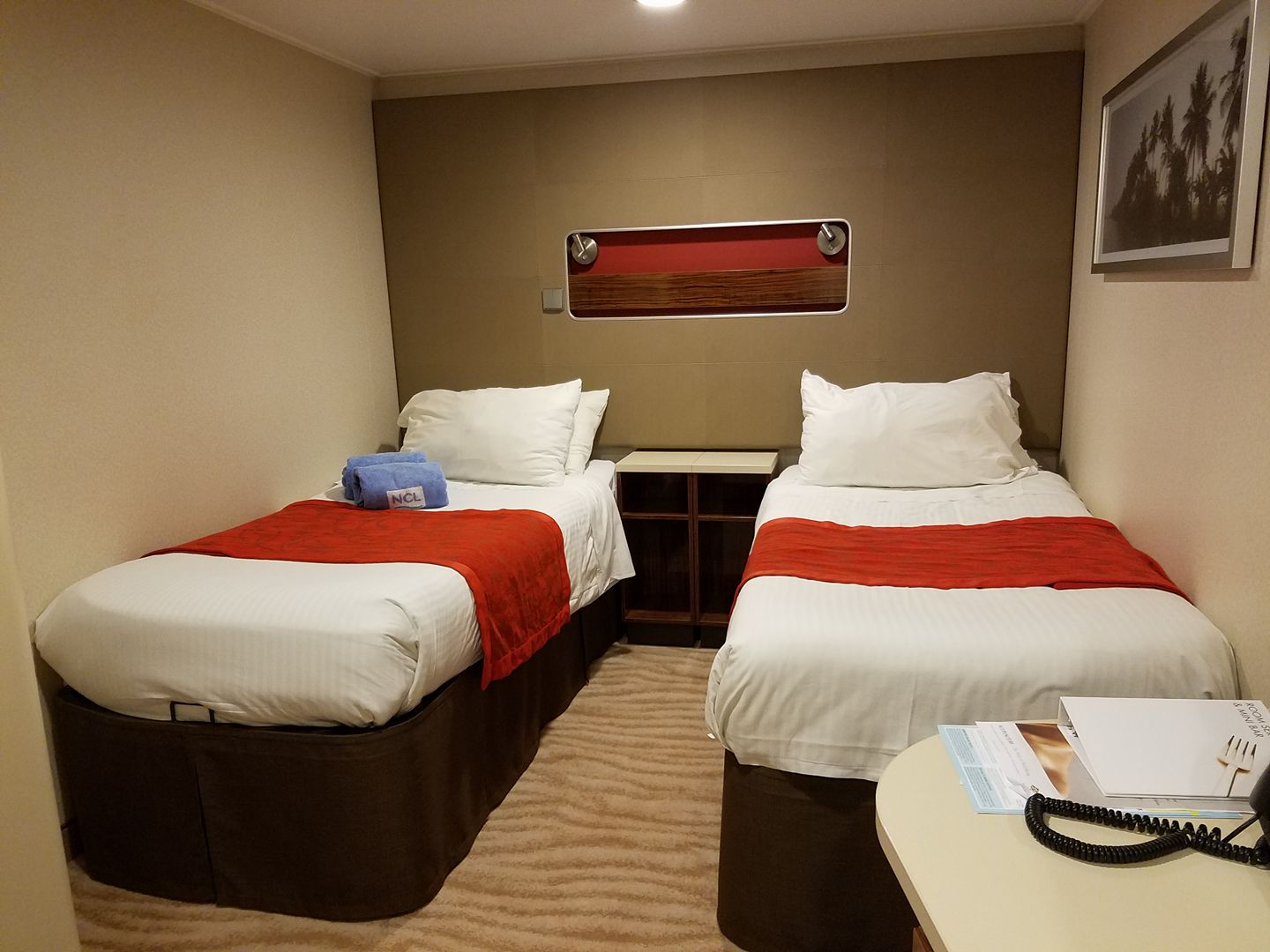 Since we had all of Sunday night and all of Monday out in the open blue, we made good use of our time on the ship, which, by the way, is loaded with entertainment. We purchased the package for the Mandara Spa, so we were chilling (more like sweating) in the steam room, relaxing in the salt room, swimming in the pool, and lounging on the chairs with a captain’s view while sipping on orange-infused water. 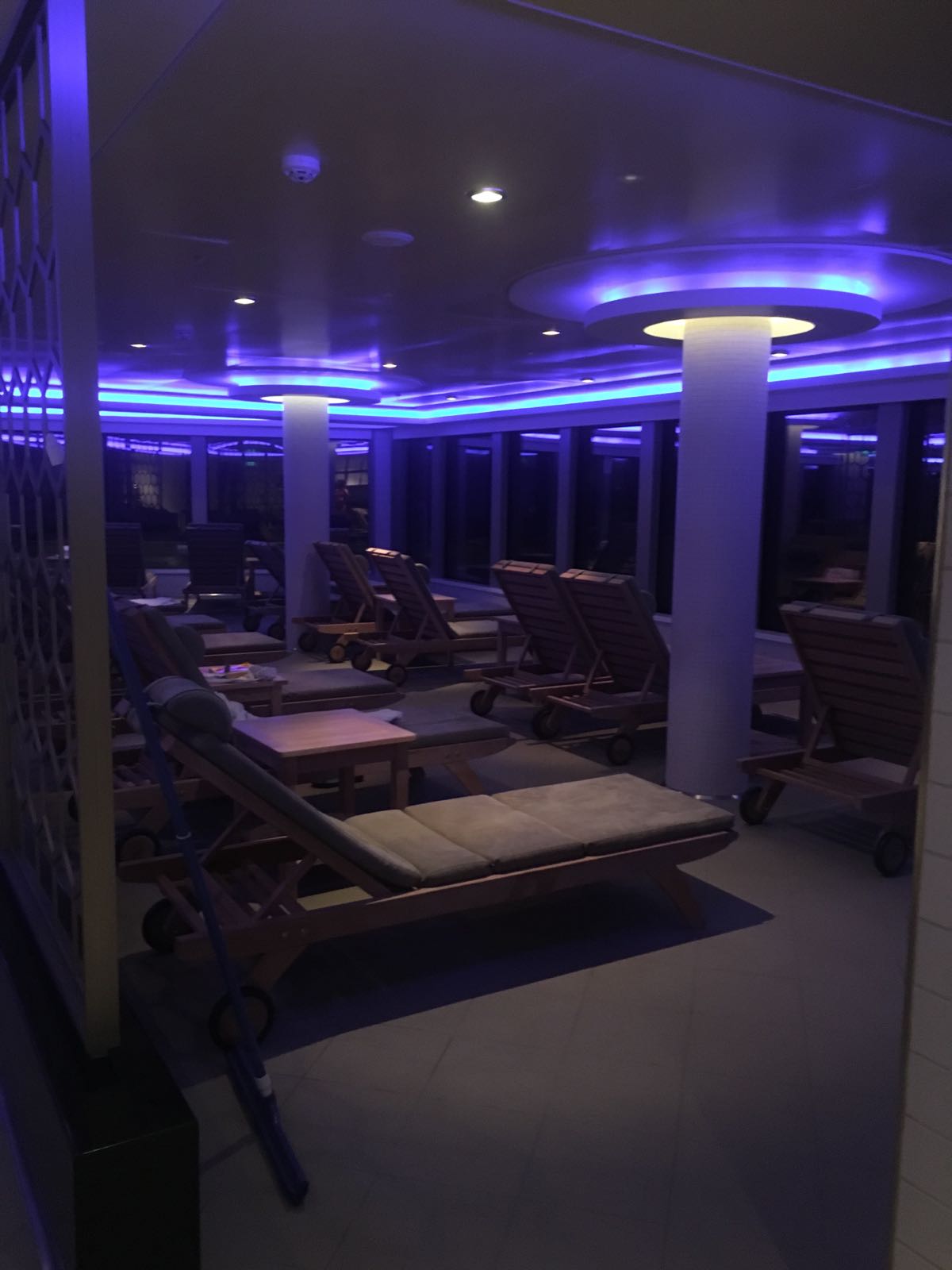 Lounge chairs in the spa at night. 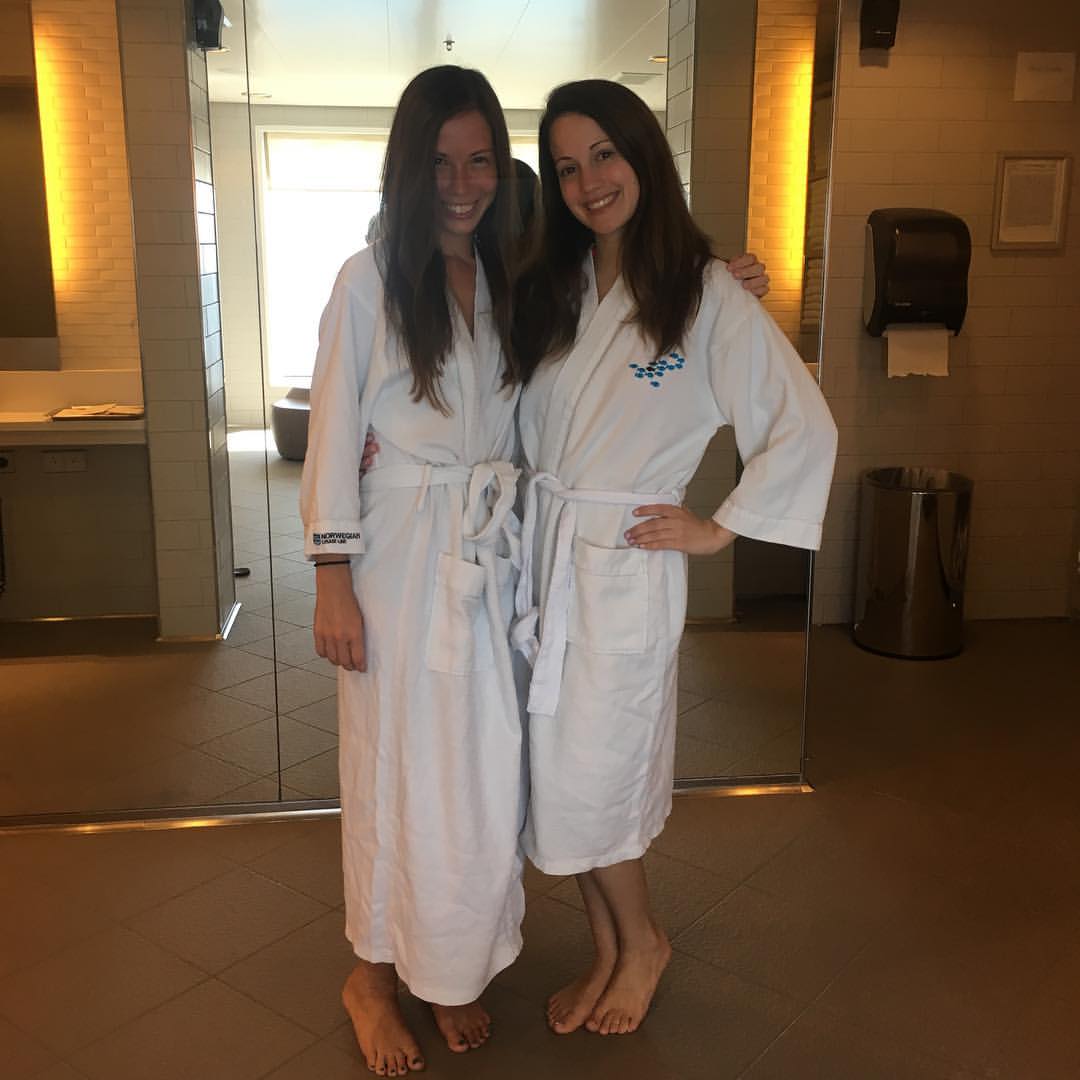 Robes and all. There’s nothing like the spa life.

As we floated towards our destinations, we made the most of our time. I went to the gym to toss around kettlebells and dumbbells, and I also ran a mile on the outdoor running track on the top deck a few times. Stefania played Bingo (and won white wine!), and gambled in the casino and won but then lost it all (whoops). Besides eating, we saw the amazing cast of Burn the Floor perform in the theater and at the Tropicana restaurant (Dancing with the Stars can suck it), watched Finding Dory, climbed a rock wall in the windy night on the top deck, and slid down all of the water slides (the blue and green slides drop you straight down because the floor beneath you opens up like on Russian Roulette — such a thrill). We indulged in many restaurants — there are at least 28 on board — and we sipped fruity drinks and wine at various bars (had to put our all-inclusive drinks package to use). 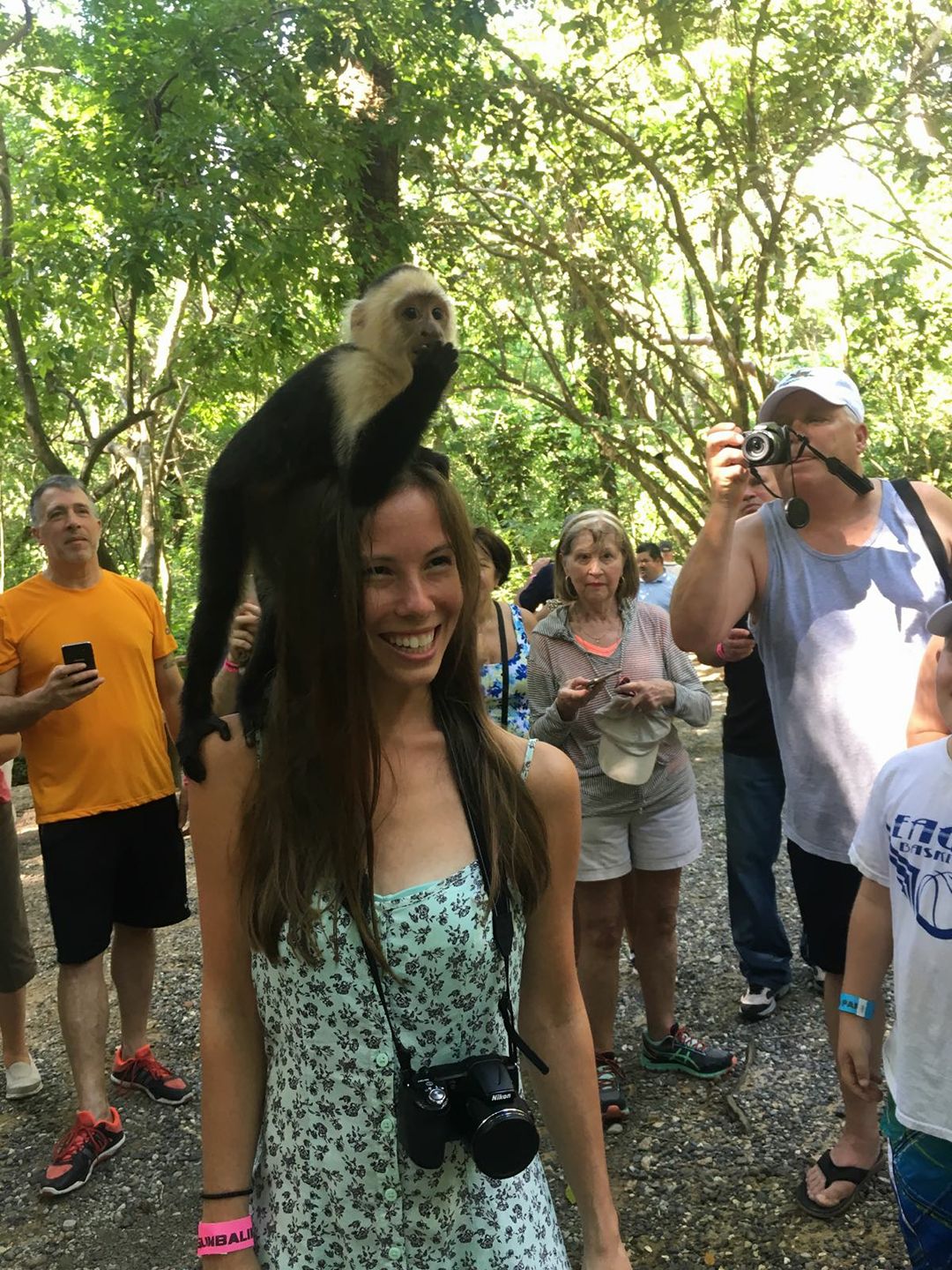 Hanging around with a capuchin monkey at Gumbalimba Park.

We docked in Roatán, Honduras at 10:00 Tuesday morning. We were greeted by singing and drumming locals and adventured a bit before our excursion to Gumbalimba Park. When it was time for our Honduran quest, we lined up with fellow cruisers and took a bus about a half hour away from the port. During our drive, it was eye-opening to see the way of life in Roatán. Chickens and dogs roamed the streets, houses were colorfully painted — some of them run-down, damp clothes hung on clothing lines, and many people got around by bike. It reminded me to appreciate the life I live in the United States.

Once we got to Gumbalimba, we went on a guided tour to see and interact with iguanas, toucans, macaws, and capuchin monkeys, who were very sneaky. The little guy on top of my head in the photo above took our locker key out of the plastic compartment on Stefania’s lanyard and ran up a tree with it — luckily he dropped it when he figured out it wasn’t edible. Afterwards we hung out at the beach before making our way back to the bus. 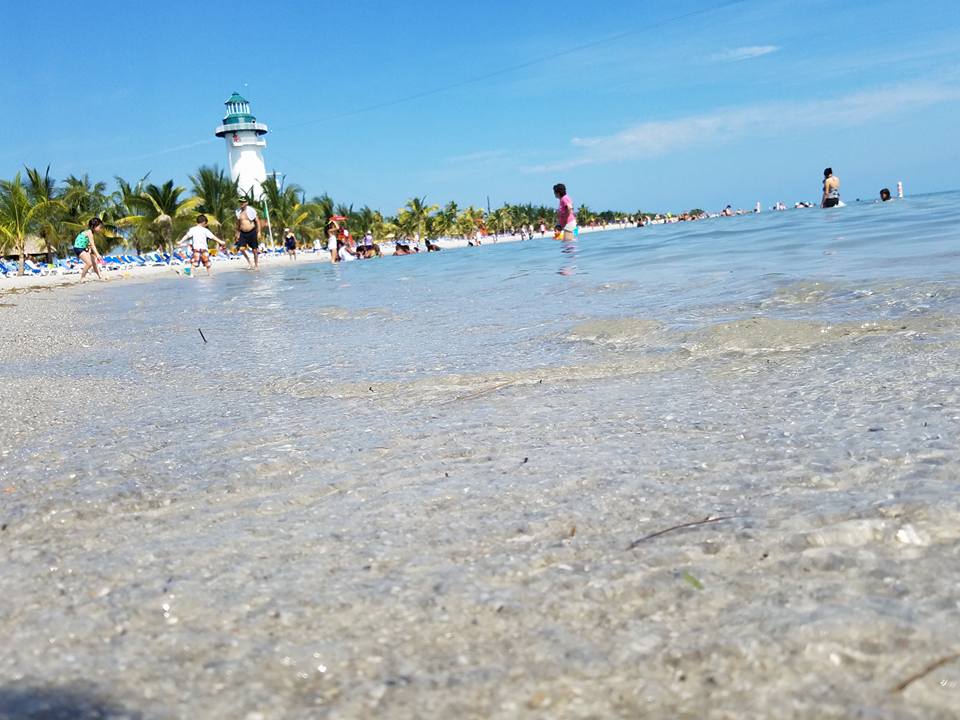 At 8:00 a.m. Wednesday, we arrived to Harvest Caye, Belize. We spent most of our time on the beach, and as we headed back to the ship, we did some sunglasses-and-souvenir-shopping. I enjoyed the beauty here, but there was no culture. The beach seemed to be the main attraction, but there was also a butterfly garden we had fun walking through. For the most part this island felt resort-like, and we learned that this part of southern Belize is owned by Norwegian, so that explained a lot. It was incredible knowing I was in Belize, and we enjoyed swimming (to the buoys and back!) and catching rays of sunshine here. 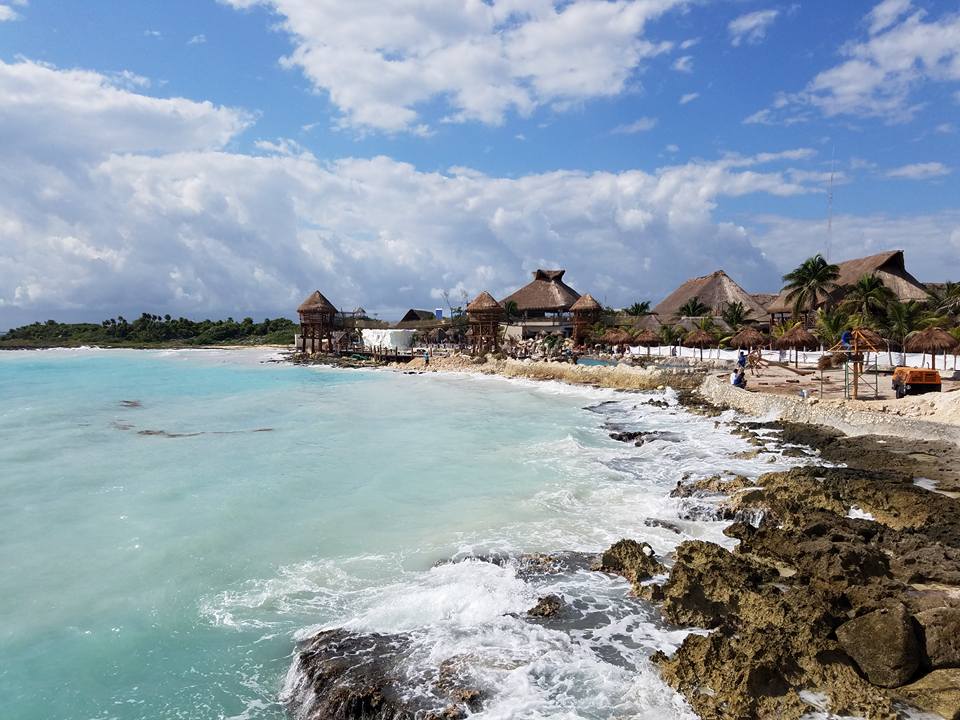 Costa Maya, Mexico is where some spice came into play. It was seriously gorgeous. I mean, look at that water! Although this city was touristy, it had some hardcore Spanish-speaking, Mexican culture to it. Locals tried luring us into their shops (note: some of them are very pushy), which there were plenty of. I got the sense that many shop-owners look forward to the hordes of people coming off of cruise ships, which is understandable, as it’s likely a chunk of their income. Costa Maya also had nice-looking restaurants — one even had a bar you can swim up to. I gave my basic Spanish-speaking skills a whirl here, much to the locals’ entertainment. At least it got us to the nearest bathroom. 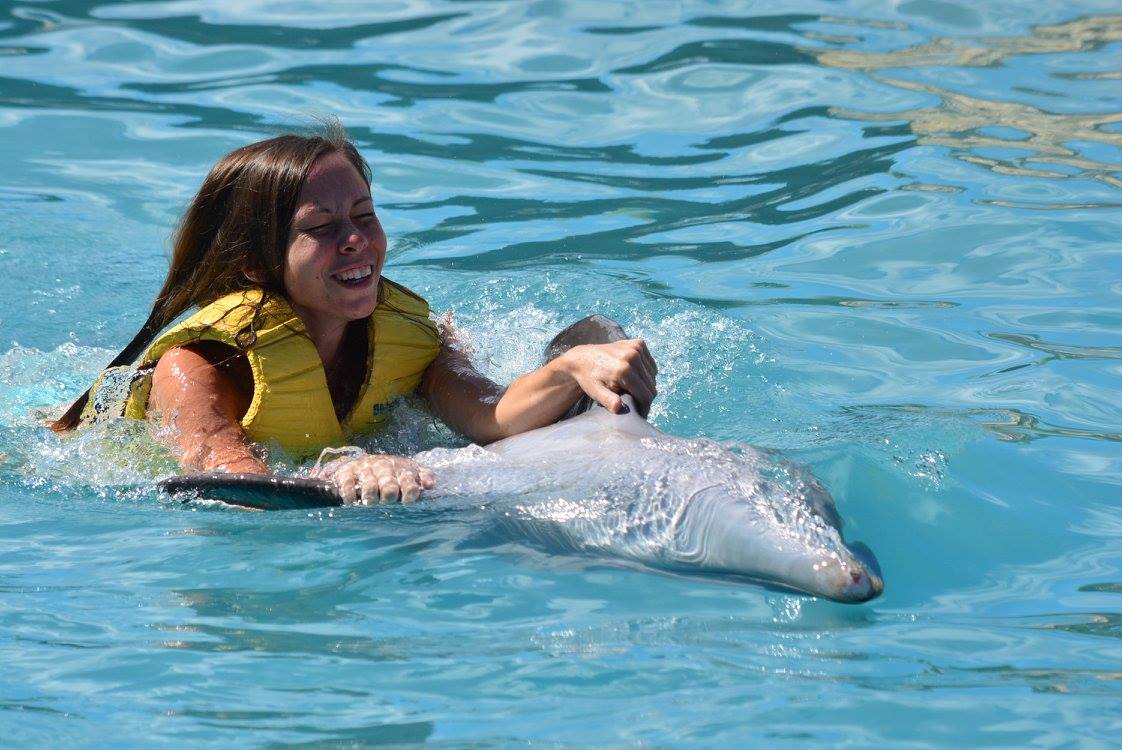 Riding with Troya the dolphin.

Cozumel, Mexico was the highlight of our trip. The city itself is lively and the locals were muy amigable, so we happily exchanged pleasantries in Spanish. I felt lots of culture here, and it was the most “alive” spot of all our destinations. It was urban and bustling and packed with shops and restaurants and flashy advertisements. This was also the city of our second excursion. This time we got in a van and headed to Dolphinaris for a dolphin swim and ride.

First, I must say that as breath-taking as it was to be up close and personal with the dolphins, I had a bit of a guilty conscience contributing to their captivity. At the same time, it was an experience I couldn’t let pass me by. I asked one of the trainers about the treatment of the highly intelligent inhabitants, and she told me the dolphins there have all been raised in captivity, since they breed them. I don’t agree 100% with this, and feel that their finned-friends may be aware of their captivity. It made me feel at ease that the trainers were knowledgeable, gentle, and very serious about the safety of the dolphins. 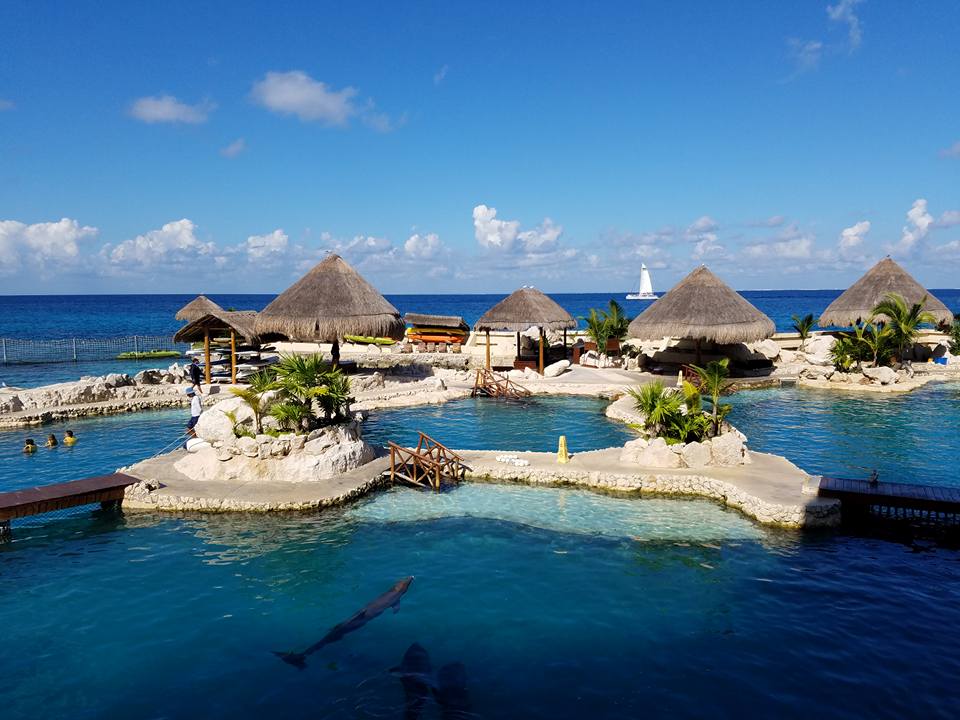 The blue waters of Dolphinaris.

The dolphin my group worked with was named Troya, and her smarts astonished me. Just by using basic hand signals, she’d make noise, twirl, jump, give kisses, put up her flippers, or come pick us up for a belly ride. We learned all of the hand gestures before approaching, and we each got one-on-one time with her. It was an experience of a lifetime. 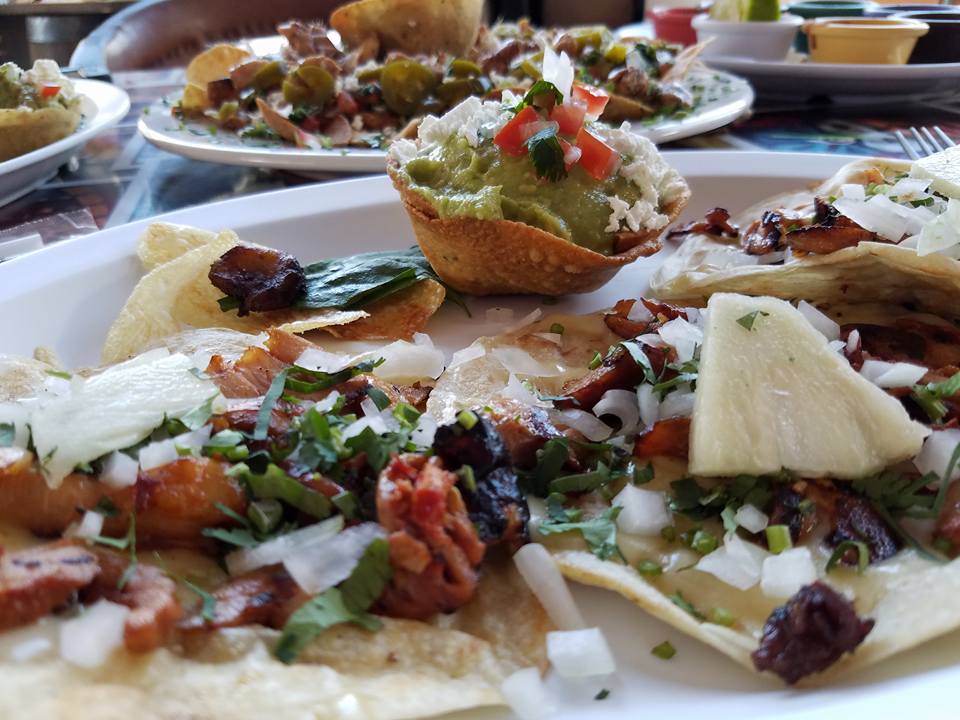 Of course, we had to have Mexican food in Cozumel, since eating a taco in Mexico has been patiently waiting on my bucket-list. Pictured above is a fiesta-for-your-mouth from the deliciosa restaurant, Taco y Tequila. It was a fantastico way to say adios to our last stop on our cruise.

On Friday night as the Getaway headed back towards Miami, Stefania and I made the excellent decision to dance on the top deck dressed in all white while wearing glow-in-the-dark face paint at the glow party. 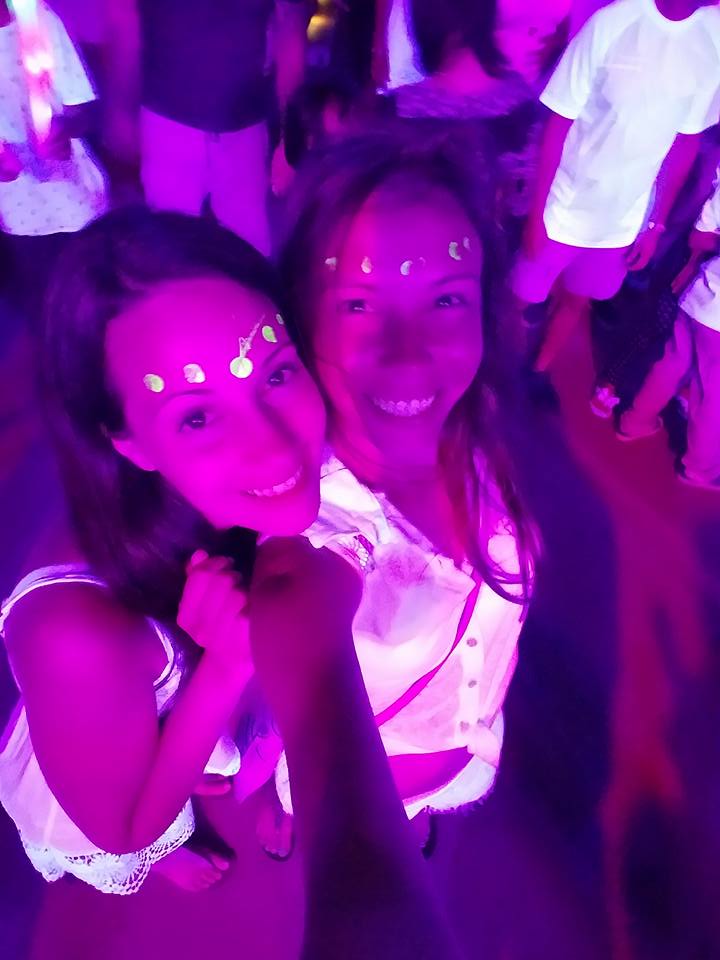 Enjoying our cruise to the last drop! PS: We stole that face paint when the face-painting booth closed down super early, and we were next in line. 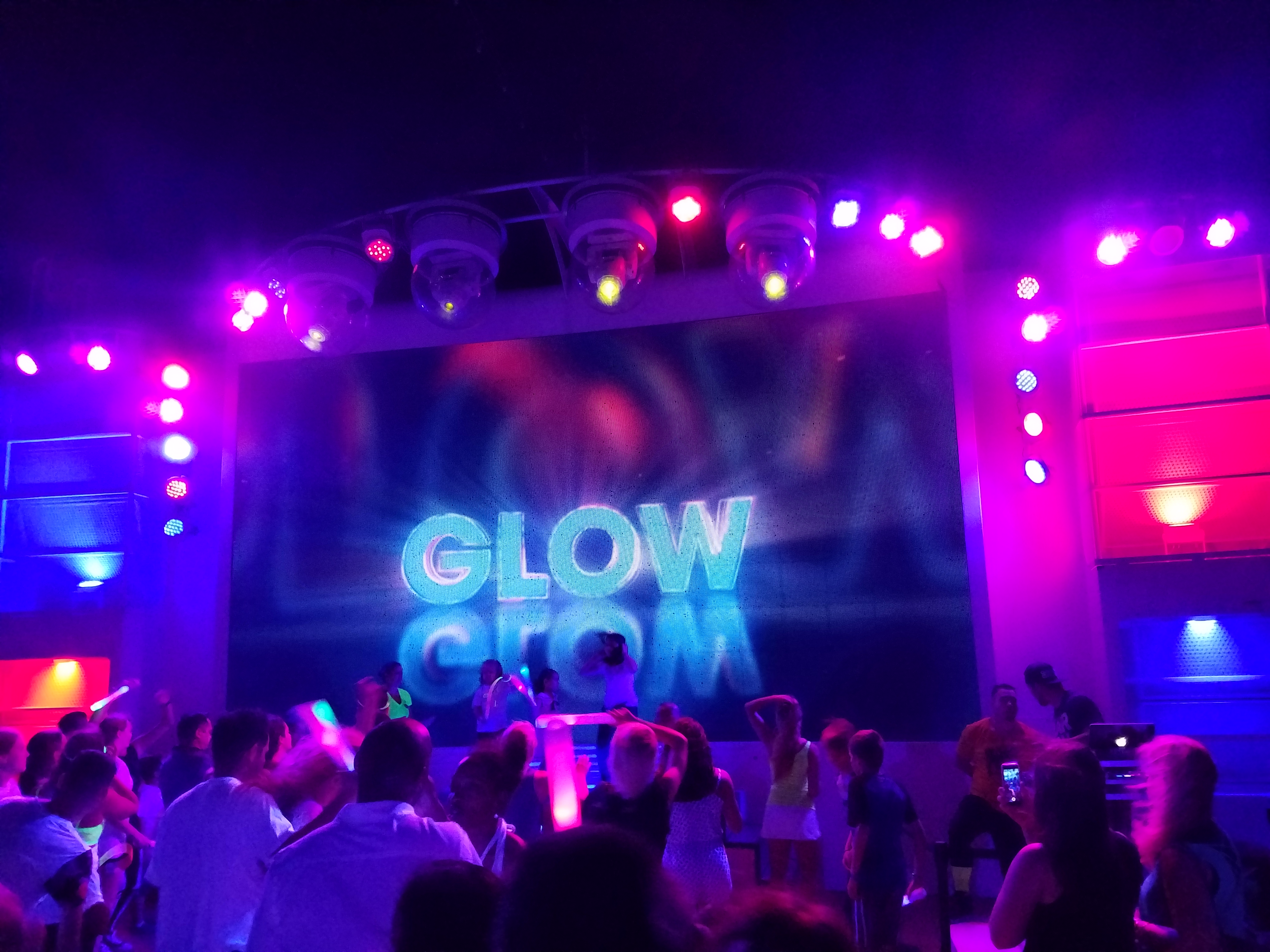 The crowd was fun and the music was loud, and we made some awesome memories that night. We got a good night’s sleep after this, and the following day, Saturday, was filled with relaxation at the spa and sunning ourselves on the top deck.

Overall, the Norwegian Getaway was a terrific cruise ship with outstanding shows, tasty food, good drinks, friendly staff members, and funtastic destinations. The one downside was getting off the ship once we were docked back in Miami. It took three hours, which obviously nobody was happy about. That’s the one thing I think can be improved, but I guess it’s difficult to get 3,963 guests off the ship within a certain time frame.

Interrupting for a segundo. To see more cruise pictures, check out the video I made of our cherished memories!

Long story short (I guess it’s too late for that), I recommend the Norwegian Getaway to anyone: families with kids, groups of friends, couples, singles — anybody! It was the adventure of a lifetime and introduced me to a fun new way to explore the world. 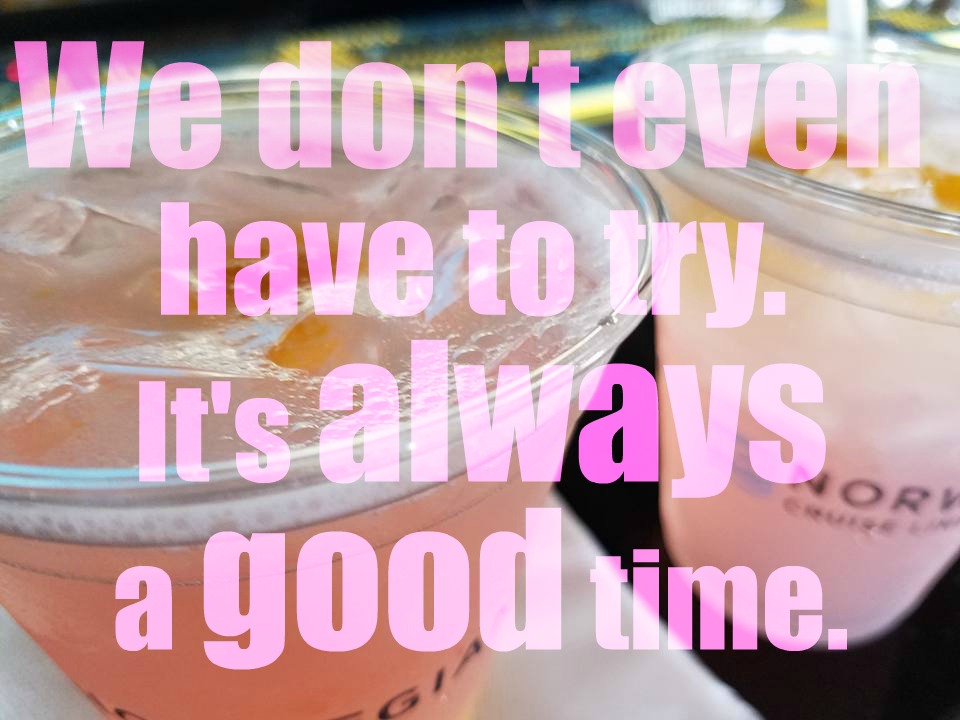 Thanks for the memories, Norwegian Getaway!