I fell in love yesterday — in love with wild cats of all sizes. From a curious ocelot to a chatty cougar to a pride of majestic lions roaring enough to make the ground rumble, I got to meet these species and more, all in one admirable place, the Carolina Tiger Rescue in Pittsboro, North Carolina.

As a lover of wildlife and putting my weekends to good use, I signed my boyfriend and myself up to tour the big cat sanctuary I’ve read so much about, three weeks ago, and thought about it every day until the afternoon we drove out there for our visit. It was worth the wait and was as exciting as I expected.

After we signed in, we explored the gift shop until it was time to meet with our tour group in the Education Center to go over safety rules with the tour guide. After a couple of questions, we headed out of the building and through the gate to big cat territory. 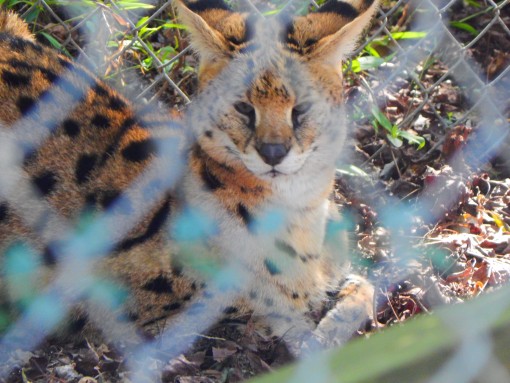 The first wild feline we came across was Elvis the serval, who stood at the fence to greet us as we learned about his background. Our tour guide informed us that this handsome cat came to the Carolina Tiger Rescue in 2009, when he was left at the entrance of the parking lot in a carrying crate with a note describing a few things about his history, but no contact information. Elvis was thought to be about two-years-old when he arrived, and was undernourished, but thanks to the staff and volunteers at the Carolina Tiger Rescue, he’s healthier and happier than ever. And though he had been poorly declawed by his previous owner, he’s known for taking out a black snake during his first few weeks at the sanctuary. Clearly this little serval is a survivor. 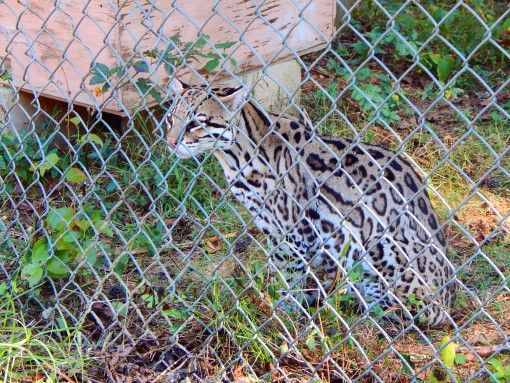 Ocelots have gorgeous patterns on their coats, and it was a real treat to see one up close. Pictured above is Trapper, and we got to meet him during treat time, when he happily munched on some raw chicken. I was amazed by his natural beauty and his low-sounding growls, which apparently is the only kind of sound he, and other ocelots, can make. On the tour, we learned that Trapper was one of the last ocelots born there, before breeding was ceased. 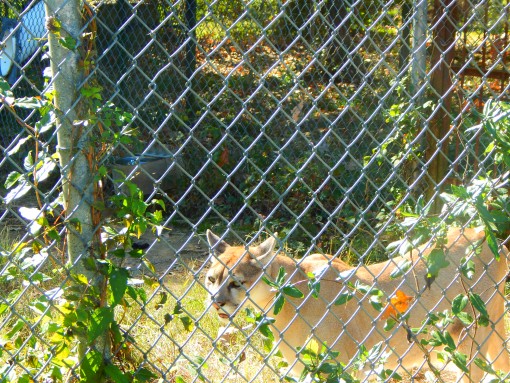 Star the beautiful cougar was a loud-mouth. She was in heat, so she was calling for a mate and we could hear her pretty much during the entire tour. She wasn’t interested in us much, to say the least, but it was an incredible experience to be so close to a wild cougar (AKA mountain lion, puma, panther) and hear her calls. We learned that most of the female cats at the sanctuary are not spayed, but all males living with females are neutered, because neutering is an easier surgery to perform, and is done to prevent future litters of wild cats.

Star’s rescue was part of a government seizure at the Collins Zoo in Mississippi, resulting from an undercover investigation done by the Humane Society of the United States. 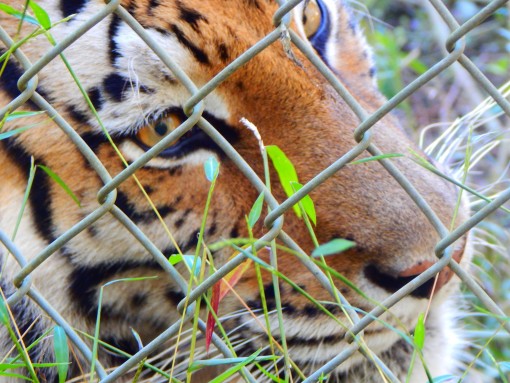 This powerful tiger pictured above is Aria, and she’s known to be the most accepting of people among the rescued cats, according to our tour guide. Aria grew up in a family’s backyard, but eventually became very ill at the age of 10, and only weighed 200 pounds — half the weight she should have been. She was so weak that she could barely hold herself up. Fortunately, after receiving a call from a concerned neighbor, Carolina Tiger Rescue picked Aria up and transported her to her new forever home, where she is given the care and nutrition she needs. She is now stronger and healthier than she ever was. 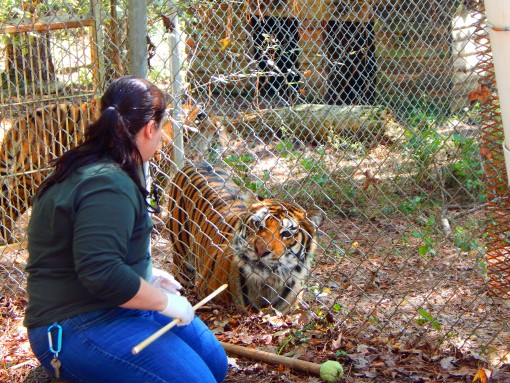 As our tour group approached Moki the tiger, she was being trained to perform certain tricks in exchange for raw chicken. This wasn’t being done for entertainment purposes, but so that she becomes comfortable being near the staff so that they could treat her with proper medicine and care. Moki impressively knew how to place her paw up on the cage, stand on her hind legs, and lie down on command. There was absolutely no cruelty involved, only positive reinforcement, and the care and respect from the staff member training Moki was obvious. It was a real wonder watching Moki, a powerful creature being so gentle, and so intelligent.

She was rescued along with a few other tigers from a facility in Missouri that bred and sold exotic animals for profit. 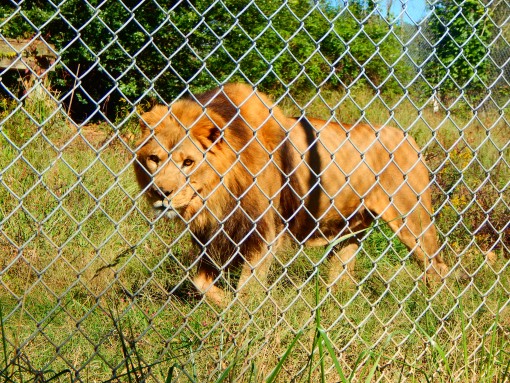 As the only male lion at Carolina Tiger Rescue with a mane, Roman was breath-taking to watch. This big guy came to the sanctuary after he became too large to be an attraction at a resort, where he spent his younger days as a “pay-to-play” cub for photos and human entertainment. He now lives with his sister, Reina, at the sanctuary and seemingly enjoyed the attention from all of us impressed primates on the other side of the fence. We even got to hear him roar, along with the other lions nearby, which just reminded me of their power and place in the world, and that none of these elegant beauties should ever have to suffer in the sickening dangers that members of our own species enjoy putting them through for our own selfish pleasures. 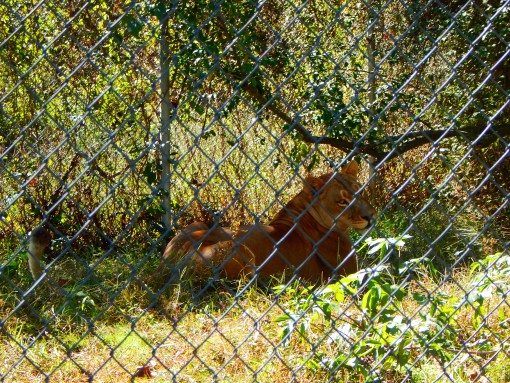 Here’s the pretty Reina, Roman’s sister, who lived the same background as he did, being used as a “pay-to-play” cub for human profit, until she got too large and made people nervous. Reina minded her own business, chewing on some bones as we walked by, enjoying some time in the shade, and was later found roaring with her brother, and the three neighboring lions.

As our hour-and-a-half tour came to an end, I reflected back on all that I learned about these wild cats — there were some surprising facts I didn’t know, such as the fact that tigers have nerves in their gums that send a message to their brain when their prey’s heartbeat stops (as they’re holding the prey by the neck), and that there are only about 3,000 tigers left in the wild.

The Carolina Tiger Rescue sanctuary is completely safe, as the fences continue down beneath the ground, and will sway back and forth if a cat tries to climb up them, which will knock them off. Each habitat is designed to fit each species’ needs to keep them happy and healthy. 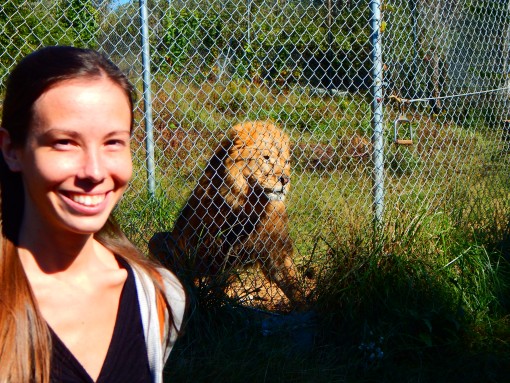 Carolina Tiger Rescue, formerly the Carnivore Preservation Trust, is a 501(c)3 nonprofit wildlife sanctuary whose mission is saving and protecting wild cats in captivity and in the wild. To schedule a tour or to learn more information, visit carolinatigerrescue.org.